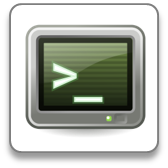 In this section we describe the steps to set up the ADOxxWEB API, in order to access the ADOxx data base and execute write and read AdoScript Commands that are defined in the ADOxxWEB API.

The proposed development environment consists of the following tools and technologies:

As a prerequesite to get started, make sure to have the Eclipse IDE up and running and the necessary connectors/plugins for SVN installed.

i) For the stabilization of the ADOxxWeb service, which is the software component that executes AdoScipts, one needs the LBRS/RAM component. This component consists of two web application projects.
- https://www.adoxx.org/svn/devtools/2 ADOxx Building Blocks/2 ADOxxWEB API/LBRSWS

ii) ADOxxWEB API: On top of the LBRS/RAM component, we have a functional implementation of a generic API, this API enables interaction with the web-services in Java for the development of business logic. The API is implemented generically, meaning that it works with any library. Further extensions are possible to wrap method/modelling tool specific functionality on this level. Currently, two different interaction protocols for the development of web applications are supported, SOAP and ReST.

- The ADOxxWeb API is a web application that communicates with the LBRS/RAM component in order to execute commands and retrive information. This web application is a Maven project and has dependencies to three other projects (see below) and can be downloaded at the following link:
https://www.adoxx.org/svn/devtools/2 ADOxx Building Blocks/2 ADOxxWEB API/ADOxxWeb API

- The Data Access Object: This component is for communication between the LBRS and the execution commands, for instance to write and read commands.
https://www.adoxx.org/svn/devtools/2 ADOxx Building Blocks/2 ADOxxWEB API/ADOxxWeb DAO Service

A. Right-click in the project explorer, select "Import" -> "Import project from SVN" 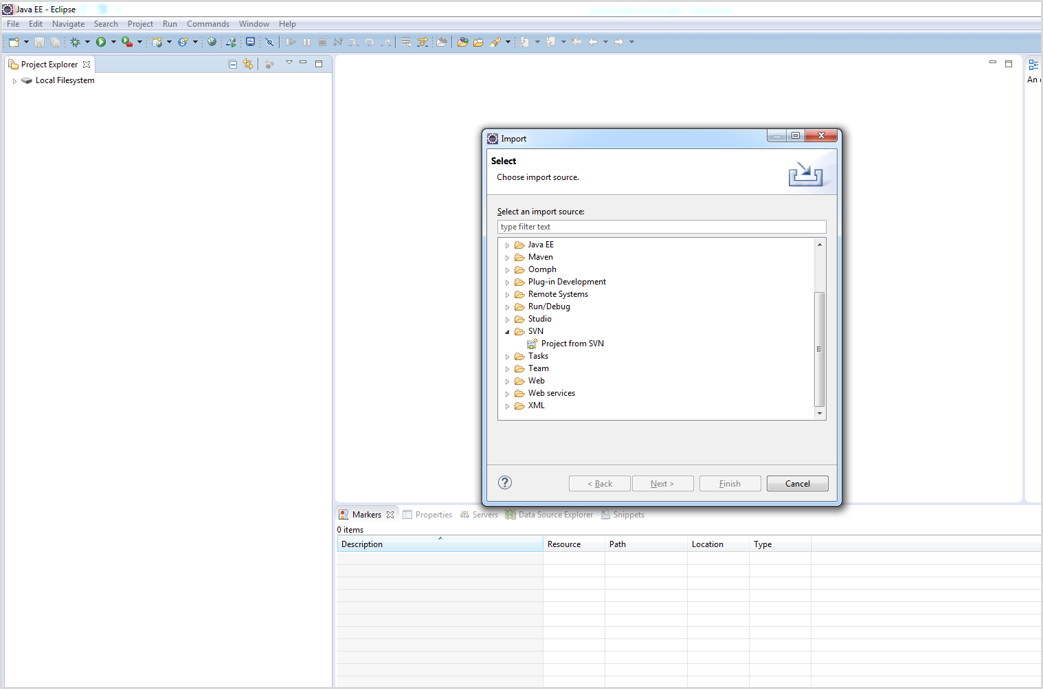 B. Enter the URL of the project (as listed above). Since the ADOxx.org SVN is public, no username or password is needed. 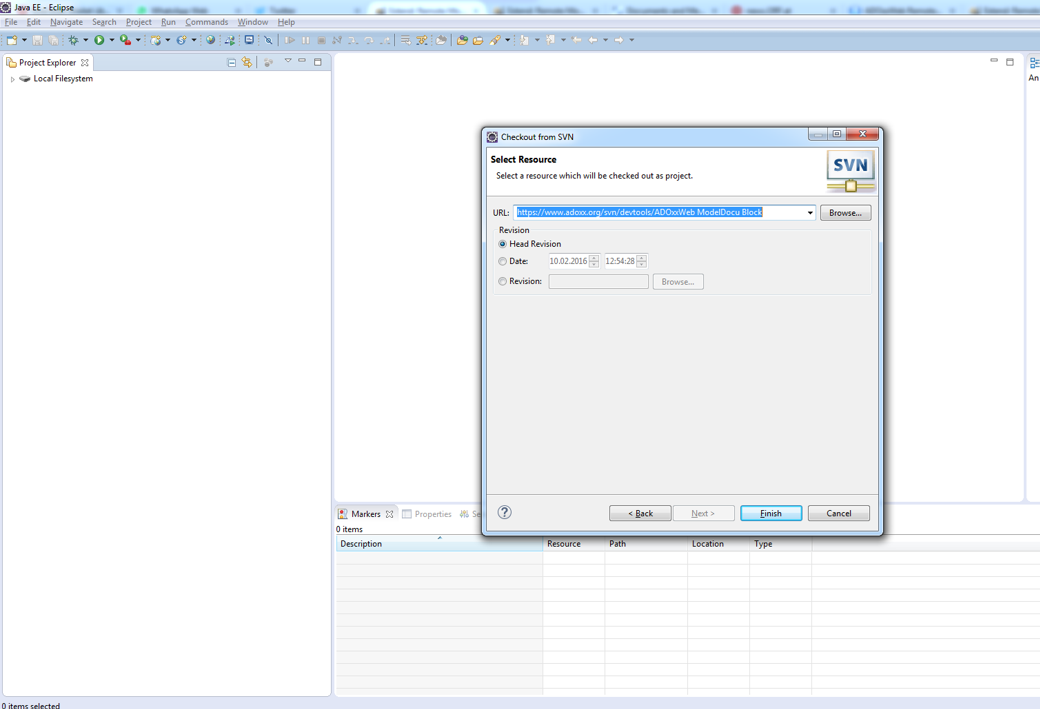 C. Click on Next and Finish to trigger the checkout (in the next steps you can configure the name of the project in Eclipse. In case you want to update, please use the respective wizard steps).

The periodicity of these checks are dependent on the configuration of the LBRS web-service.

The next function that the service will provide is to give the ability of the connected web application to split time consuming tasks from shorter running tasks. Bungled in with this function is the ability to further split tasks by user type and product.
The third major function is to enable the ADOWS instances to be spread over one or more servers. This is achieved through the use of SOAP/Web technology and the Remote ADOWS Monitor. The RAM takes care of the ADOWS processes that are running, monitoring them and restarting them if necessary.
The final major function is to allow the service to be hot-configurable, thus allowing the system administrator to bring in or take away system resources when needed. This is achieved by allowing to load a new/different configuration via an exposed SOAP function.
A. Download the ADOxxWEB service software component and save it on your local device.

In the //LBRS/WebContent/conf/LBRSConfiguration.xml file the following settings for the MainLBRAS and the VirtualLBRS can be customized. 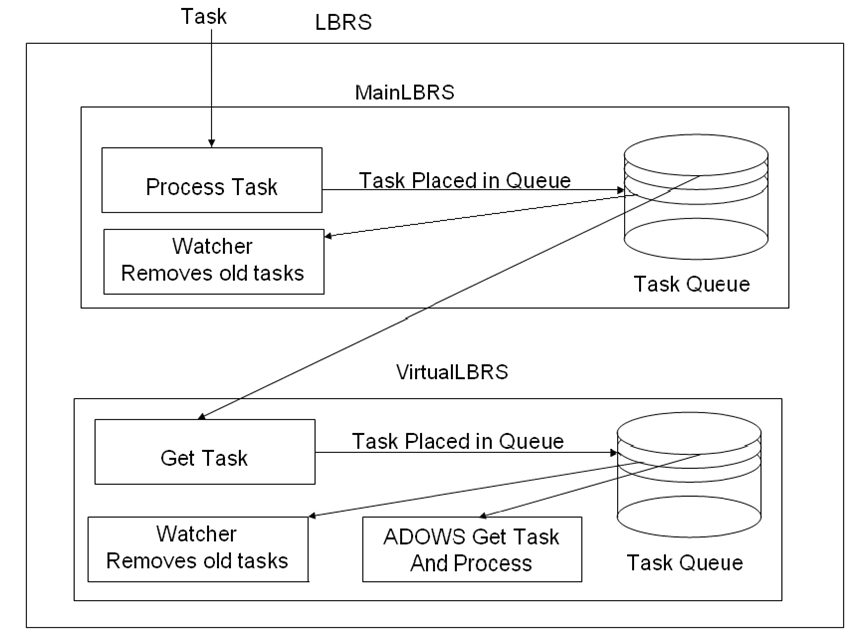 (i) MainLBRS
The MainLBRS has a queue where all of the tasks sent to the LBRS are initially stored. Each task waits in this queue until a VirtualLBRS picks it up. The MainLBRS has a watcher service to check on the queue and to discard tasks whose wait time has elapsed. It uses the RAM to start, monitor and stop ADOWS instances on request.

(ii) VirtualLBRS
Each VirtualLBRS must have a section within the LBRSConfiguration.xml file. Each section has the following nodes:

The following example of the LBRS configuration file contains one VirtualLBRS and one ADOWSLogin with the encrypted password: 'password'. 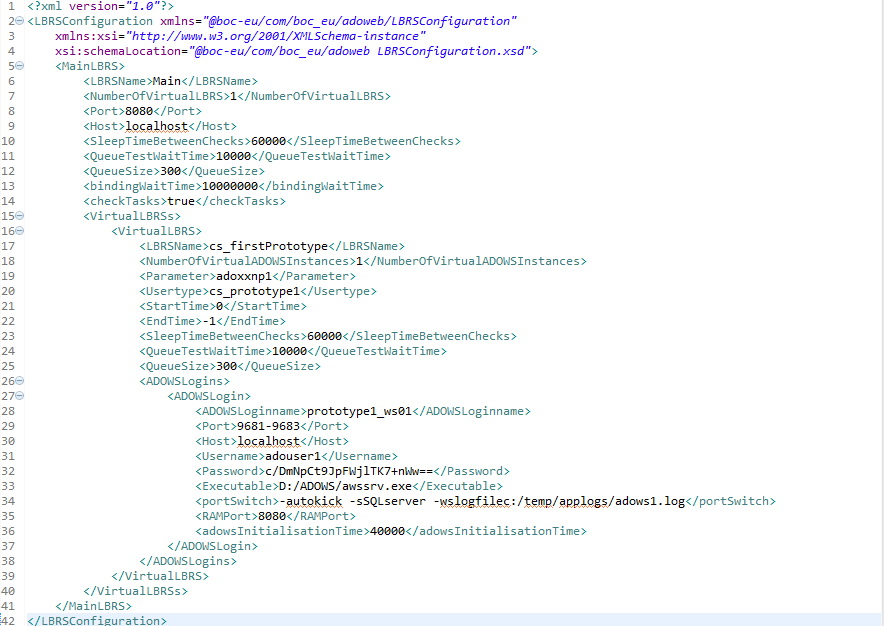 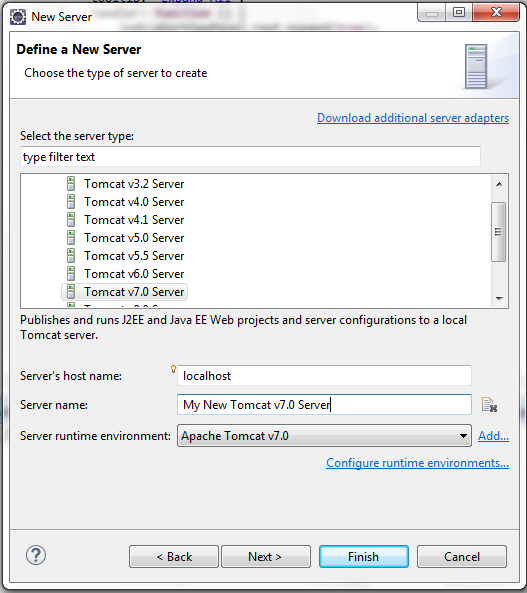 D. Add the LBRSWS & RAM web applications to the server

Right-click on the server, which is created in the previous step, and select 'Add and Remove ...'. Select LBRSWS and RemoteADOWSMonitor and add them to the server.

The web applications are deployed on the server and the LBRSWS is accessible at: http://localhost:8080/LBRSWS

A. Create a Apache Tomcat server

B. Change port number of the server

Since the port 8080 is already used by the LBRS/RAM server, we have to set a new port number for the server where 'ADOxxWEB Interface' will run on. For this purpose, please double click on the server which was created in the previous step, and change the port number (e.g. to 8180) in the 'Ports' area. 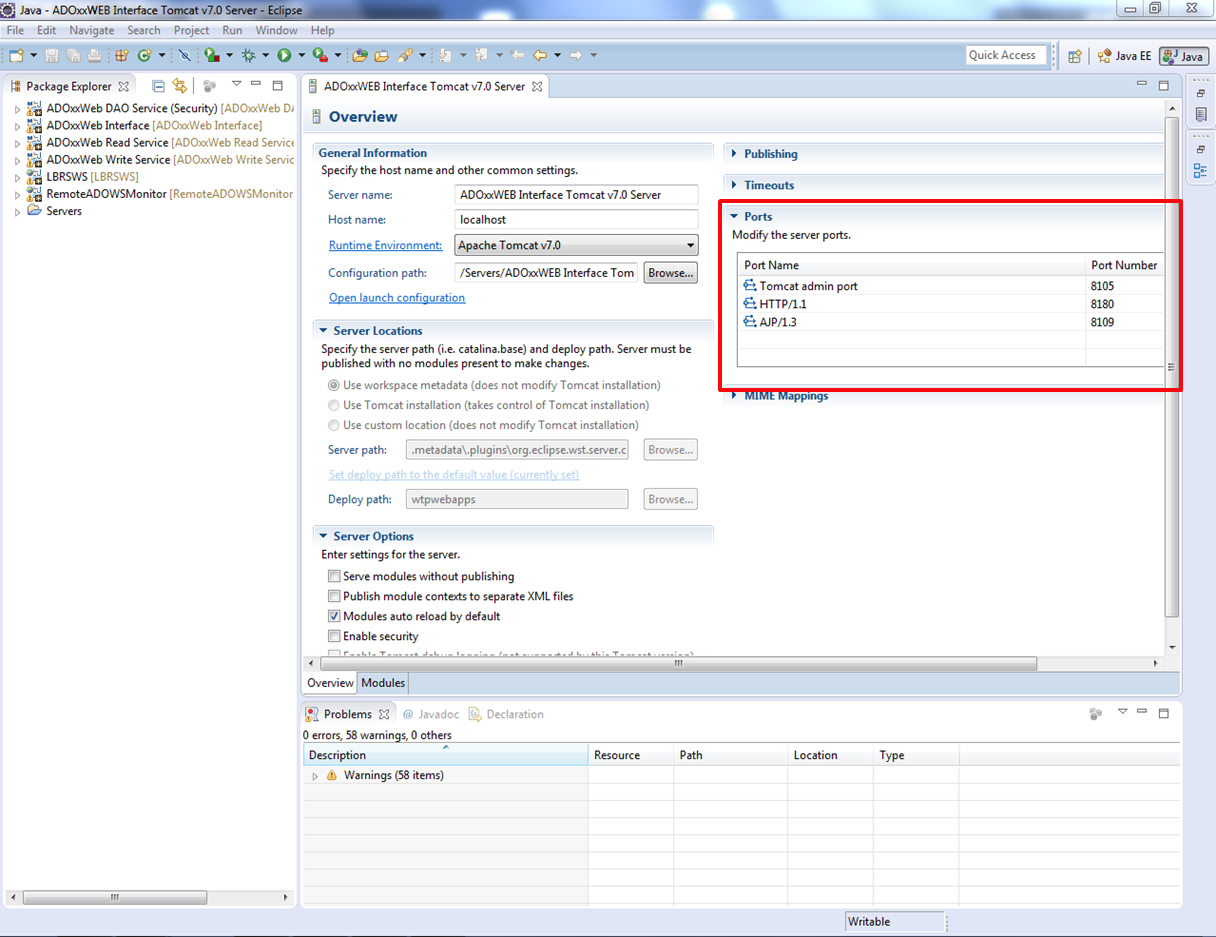 In order to run the ADOxxWEB Interface on the server we have created in step 4.A please perform steps 3.D and 3.E.

The services that should be available for the interface can be defined in the /src/main/webapp/WEB-INF/context.xml. Within this file you can call the pre-implemented read and write commands as beans and assign them to 'jaxws' (SOAP) or 'jaxrs' (ReST).

As an initial case to familarize yourself with the extension possibilities for this building block, this example shows you how to add a new AdoScript command into the ModelRead wsdl which already exists in the above imported project.

EXAMPLE: Implement your own 'ModelRead' Command

A. Go to the ADOxxWEB Read Service

C. Copy/paste the following code into the 'ModelRead' class

2. Add the command into the 'ModelRead'-wsdl

B. Add the above command into the ModelRead interface by copy/paste the following code

In the following we are going to implement our own WSDL. This example will be a read function (for the write commands it is equivalent). 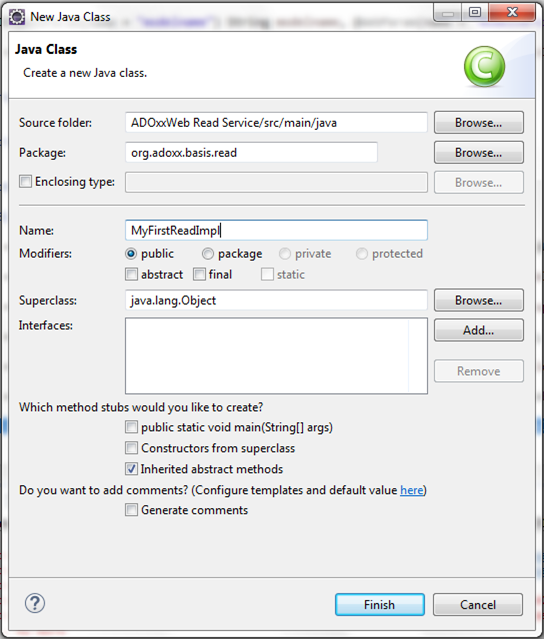 2. Create an interface in the 'src/main/java/org/adoxx/basis/read' package

D. Define a String class within the MyFirstImpl class with input parameters. The String class represents character strings. All string literals in Java programs, such as "abc", are implemented as instances of this class.

4. Configure 'MyFirstRead.java' interface and add above created command into it.

5. Add the interface to the 'context.xml'

In order to display the the above defined interface in the wsdl list one has to make some adjustmaents in the 'ADOxxWEB Interface' project.

A. Go to the 'ADOxxWEB Interface' - project

B. Open the 'src/main/webapp/WEB-INF/context.xml' file.

D. Create an entry in the read service endpoints: